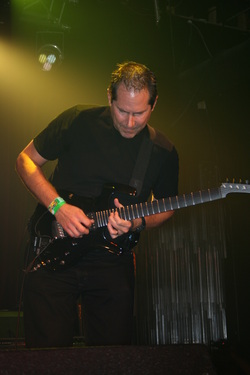 Introducing Larry Smith, the latest and a very welcome addition to the sound of CSB. When Chuck decided to go back to his roots and add a second guitar, he knew that, in a world full of "gun-slinging shredders", his success would pivot on finding a guitarist who could strike the right balance between talent and attitude and someone who shared many of his musical influences. Then, he discovered Larry Smith and instinctively knew it would work.

The only thing better than one in-your-face guitar player is two of them that sound great together and play off of each other. Larry's biggest asset is his ability to fatten up every song. He does that by adding things like slide guitar, guitar synth and the fact that, like Chuck, he also plays a Parker Fly guitar.

Larry Smith spent most of his musical career playing in bands that only played original music, so he's actually the complete opposite of your typical jaded guitar veteran of 'bar wars'. His excitement and enthusiasm for his craft is just another reason CSB is fast becoming a face-melting, all-original, kick-ass rock'nroll band as the four of them prepare to launch their next live assault on their adoring fans.